Colliding black holes aren’t the only astronomical events that can warp spacetime, emitting gravitational waves that are detectable on Earth. Neutron stars that don’t spin symmetrically, for example, are also predicted to radiate a continuous stream of gravitational waves. The collaborations behind the Laser Interferometer Gravitational-wave Observatory (LIGO), in the US, and the Virgo gravitational-wave experiment, in Europe, have now combed through the data from their first observing run, looking for such a signal. The researchers couldn’t find any sign of the spacetime distortions that might result from spinning neutron stars. However, their analysis indicates that the recent detector upgrades could provide the instruments with the sensitivity needed to pick up these signals.

Using four different algorithms to analyze data taken between September 12, 2015, and January 19, 2016—the period during which LIGO recorded gravitational waves for the first time (see 11 February 2016 Viewpoint)—the team found no evidence for continuous gravitational-wave signals. But upgrades since then have increased the detectors’ sensitivities by a factor of 3 in the frequency range expected for spinning neutron stars. Ongoing upgrades should yield another factor of 3 improvement, potentially enabling the instruments to detect these signals.

This research is published in Physical Review D.

Reproducing Space Plasma in the Lab

Electromagnetic fields rotate a plasma and produce conditions that resemble the region around a newly forming star. Read More » 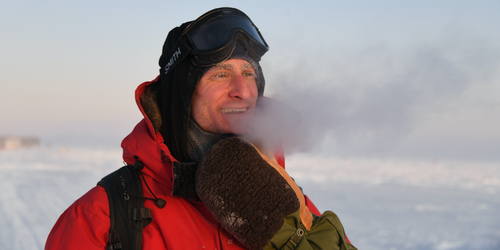 Searching for Light in the Darkness of Winter

During the six-month-long winter night of the South Pole, Nathan Precup oversees operations of the BICEP Array—a radio telescope searching for swirling patterns in the Universe’s first light. Read More »