The German soccer coach Sepp Herberger famously said of the sport: “the ball is round, the game lasts 90 minutes, everything else is pure theory.” Exploring that theory has been the goal of Andrés Chacoma of the Enrique Gaviola Institute of Physics, Argentina, and colleagues. In 2020, they developed a model describing the passing dynamics of a soccer team in possession of the ball (see Synopsis: Number Crunching the Beautiful Game). Now they tackle the behavior of the opposing team, investigating the networks that form when defenders mark players on the attacking side [1].

The researchers studied data from three professional soccer matches, precisely tracking each player’s second-by-second location. A player on one team coming within a given distance of an opposition player was taken to represent a defender attempting to thwart—or mark—an attacker. The researchers plotted the data as bipartite graphs—networks in which connections exist only between players on opposite teams. At any moment, each player on one team could be connected to any number of opposition players, with the average number being the so-called branching factor .

Chacoma and colleagues found that oscillated between values greater and smaller than 2 as the network switched between clustered and fragmented configurations. The frequency, duration, and size of the clusters obeyed a scaling law. They then created a simplified model that reproduced the statistics by treating each player as a mass that was connected by springs to every other player and to its default position on the field. Chacoma says that their results could be used by soccer coaches to gain insight into their players’ tactical discipline when the team is on the defense.

Complexity emerges in measures of the marking dynamics in football games

A tool for estimating the local entropy production rate of a system enables the visualization and quantification of the out-of-equilibrium regions of an active-matter system. Read More »

How Materials Get the Creeps

Researchers have developed a comprehensive theory of creep flow—a type of flow seen in amorphous solids such as coffee foam. Read More » 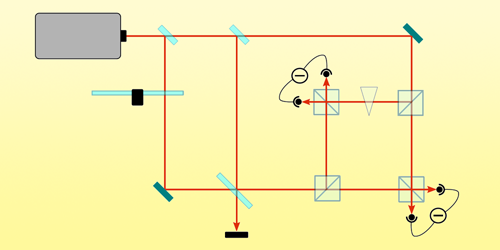 A fundamental principle in statistical mechanics called microscopic reversibility has been extended to the quantum world.   Read More »

Complexity emerges in measures of the marking dynamics in football games