May 29, 2019
Waves in a shallow water tank are made to behave like a gas of solitons, demonstrating an experimental platform for future investigations.

Solitons are not your typical waves. While most waves disperse like ripples on a pond, solitons retain their shape and act more like particles. Solitary solitons are well understood, but little is known about the “real world” behavior of an ensemble of solitons—known as a soliton gas—because of a lack of experimental data. Now, Nicolas Mordant of Grenoble Alps University in France and colleagues have used a water tank to realize a soliton gas, finding that its behavior matches numerical simulations. The work provides the first experimental evidence of a soliton gas, a phenomenon that could potentially show up in environments ranging from plasmas to optical fibers.

To create their soliton gas, Mordant and colleagues generated shallow water waves in a 34-m-long wave tank. In shallow water, individual waves are known to behave like solitary solitons. Driving a piston at one end of the tank so that it injected a steady train of waves with a well-defined shape, the team created an ensemble of solitons that ricocheted back and forth in the tank. Measurements of wave heights revealed an excellent match with those predicted by theory and numerical simulations.

The team says that this setup is a good tool for investigating “integrable wave equations,” those in which the dynamics are fully determined by initial conditions. This mathematical framework—for which solitons are a solution—is used to solve problems in nonlinear optics, plasma physics, oceanography, and condensed matter. But it’s never been clear whether this idealized framework would hold up against experiments, where frictional effects such as viscosity could potentially cause solitons to decay over time.

An unusual configuration of waves in a chemical medium may be useful for understanding heart arrhythmias. Read More » 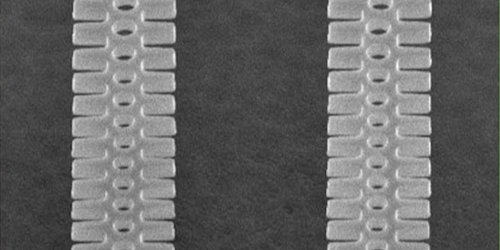 Researchers synchronize the motion of two nanosized photonic crystals, showing that their “swings” match those seen for larger oscillators, such as the pendulums in grandfather clocks. Read More »